CRRL History: The Rise of the Mongol Empire

CRRL_EricA
Central Rappahannock Regional Library
Staff-created list
In the 13th century, a seemingly invincible force of mounted warriors swarmed out of the East. Giving their enemies an ultimatum of submit or die, they carved out the largest contiguous empire in history. They were the Mongols, and their fearsome reputation endures to this day. Yet their legacy isn't limited to pillage and destruction; their consolidation and pacification of conquered territories led not only to increased trade but also to a cultural and technological exchange between East and West. Here are a few titles about the once vast empire.
By:

Genghis Khan
His Conquests, His Empire, His Legacy
by McLynn, Frank

The Mongols
A History
by Curtin, Jeremiah

The Mongols
by Morgan, David

The Secret History of the Mongol Queens
How the Daughters of Genghis Khan Rescued His Empire
by Weatherford, J. McIver 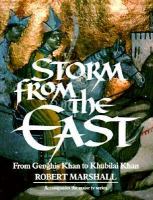 Storm From the East
From Ghengis Khan to Khubilai Khan
by Marshall, Robert